Cotton is a truly ancient commodity.  It has been cultivated by humans since approximately 3500 BCE in four distinct areas: Africa, South America, India, and Central America. Scientists and historians have found shreds of cloth or written reference to cotton dating back at least seven-thousand years.  The oldest discovery was made in a Mexican cave, where scientists unearthed bits and pieces of cotton bolls and cloth.  Archaeologists have also found cloth fragments in the Indus Valley of India (Pakistan), where the ancient Harappan civilization thrived from c. 3300 BCE.The Harappans left no written records of any kind, and thus information about them is based entirely on what archeologists have unearthed, including shreds of cotton cloth.  The Harappan civilization vanished in approximately 1600 BCE for unknown reasons; whether or not they had pioneered early cotton cultivation and weaving techniques or had inherited them from elsewhere is unknown, but it is clear that by the time their civilization ended those techniques had diffused to various areas in the Indian subcontinent.  In 1500 B.C. cotton was referred to in a Hindu Rig-Veda hymn mentioning “threads in the loom.”  It is generally believed that the first cultivation of cotton was in India, though it grew wild in several locations around the world.  People living in Egypt’s Nile Valley and across the world in Peru were also familiar with cotton.

Ancient Greek and Roman texts also make references to Indian cotton.  It was initially described as a tree that grew wool; some ancient accounts claimed that the cotton plant was a kind of shrub that grew tiny sheep that grazed on the grass below.  That rather picturesque legacy survives today in the German term for cotton, Baumwolle, which literally translates in English as “tree wool.” Plant-animal hybrids aside, it is quite clear that cotton was one of the commodities cultivated in India traded to the ancient Greeks and Romans.  Large quantities of Roman coins have been found in Indian archeological sites and it has been established that Alexander the Great wore cotton after his conquest of northwestern Indian kingdoms.

Thus, cotton did not revolutionize agriculture or ecology via exposure to entirely new areas.  What occurred instead were shifts in the major regions of cotton cultivation and exchange; in fact, the only place that has “always” engaged in major cotton agriculture and cloth-making is northwest India.  From there, other centers eventually arose in southeastern, then central-eastern China, Egypt, North African and Iberia, and what was to become the south of the United States. 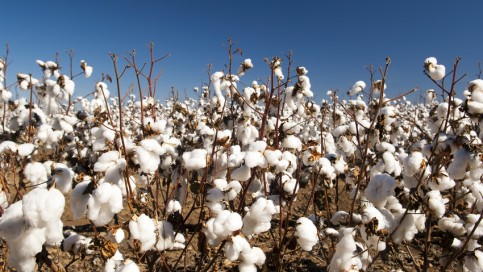 Cotton is a natural fibre whose seed are planted in spring and  plant will emerges from the soil after few weeks. The plant is a shrub native to tropical and subtropical regions around the world, including the Americas, Australia, Africa, and India.Successful cultivation of cotton requires a long frost-free period, plenty of sunshine, and a moderate rainfall.

If according to seasonal calendar, like in Australia, it is on summer cotton plant grow into green, bushy shrubs about a metre in hight. Cotton bolls appear, then split open to reveal the white fluffy cotton and seeds inside. Harvest season will be on the autumn. The crop harvested and packed the seed cotton into modules or round bales on the farm.

The fibre is most often spun into yarn or thread and used to make a soft, breathable textile. Cotton fibre surrounds the seeds of the cotton plant. The natural properties of the cotton fibre make it easy to spin into a strong thread. Each seed is surrounded by many single cotton fibres, which look like very fine hairs. Beneath these lies a second layer of short, fuzzy fibres. These are known as linters.

Cotton fibres are not straight, but actually spiral like a twist in a rope that is being held by two people twisting in opposite directions. These twists mean that the fibre surface is rough, so when a number of fibres are placed together, they interlock and twist. This makes cotton so suitable for spinning into thread. 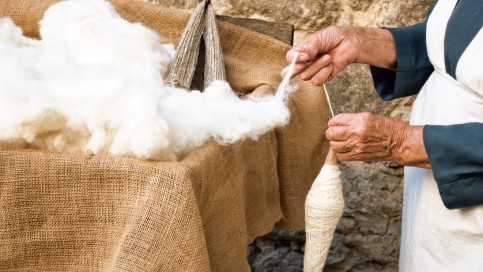 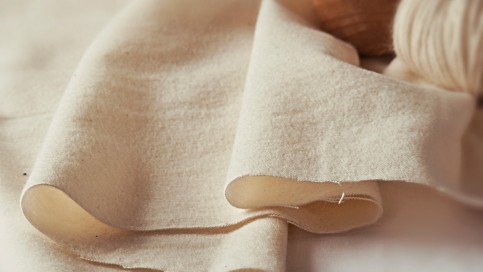 Cotton is a soft fiber that grows around the seeds of the cotton plant, it is Cool, soft and comfortable, cotton is presently the world’s most used fiber. Cotton fabrics have a pleasant matte luster, a soft drape and a smooth hand. They are very comfortable to wear due to their soft hand and other characteristics. Cotton fabrics have excellent absorbing capabilities. Cotton garments absorb perspiration, thus keeping the person more comfortable. “Absorbent” cotton will retain 24-27 times its own weight in water and is stronger when wet than dry. This fiber absorbs and releases perspiration quickly, thus allowing the fabric to “breathe”.

Cotton can stand high temperatures and takes dyes easily. Boiling and sterilizing temperatures can also be used on cotton without disintegration. Cotton can also be ironed at relatively high temperatures, stands up to abrasion and wears well. otton products can typically be machine washed and dried. Colored cotton garments retain their color longer if they are washed in warm or cool water. Sunlight does harm cotton by causing it to oxidize and turn yellow. Fabrics that are 100% cotton do shrink if they have not been treated with a durable-press or a shrinkage-resistant finish.