Linen is one of the first fibres that people made into string and cloth. In Central Asia, people were spinning linen thread and rope by about 30,000 BC, long before wool. It took longer to invent weaving, but by 5000 BC, at the latest, people were weaving linen into fabric. In the first millennium BC, the Egyptians mostly wore linen. People in Egypt made sails out of coarse linen, for example, but used very fine linen for expensive tunics. In ancient Egypt, linen was also prized for it’s rarity, but other factors contributed to its value as well. Egyptians recognised its quality; linen is lightweight, resistant to insects and wicks away moisture- perfect for a hot climate. Additionally, in ancient Egyptian culture hygiene was extremely important, and linen, with its anti-microbial properties and smooth texture was considered to be a pure material. In fact, it was believed that the whiter the fabric, the purer the garment, even going so far as to call it “woven moonlight.”

While Greeks and West Asians and Germans mostly wore wool. By the Roman period, however, many people wore linen tunics for comfort with wool robes over them for warmth, and in the Middle Ages in Europe this continued to be common, so that “linen” got to mean something like “underwear”. Our word “lingerie” is related to linen. The hemp and linen textiles are handwoven or homespun and can date back to the early 1800s, not only popular as Linen cloth but the raw one made grain sacks. They range in shades of grey, warm creams, and sun-bleached white and have a variety of textures from loose to tight and neat. Most have stripes or other bands (usually blue or red) and rare grain sacks can even be found with text or designs printed on them. Farmers individualise these designs so they could identify their own sacks when transporting grain, flour, or sugar. Some even initialed the sacks with their families’ monogram to further distinguish them.

Today, linen is appearing in fashion more and more for a variety of reasons. In regards to sustainability, linen just makes sense- natural fibres are better for the environment, and it is an excellent alternative to cotton. Additionally, its quality and performance give it a luxurious feel, even when being used in casual garments. The fabric has been showing up in many high-profile labels. 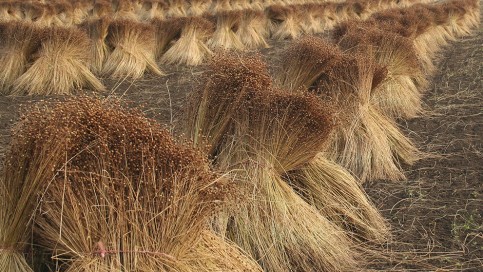 Flax plant is grown for its oil, used as a nutritional supplement, and as an ingredient in many wood-finishing product. Flax is also grown as an ornamental plant in garden. Flax fibres are used to make linen. Flax fibres are taken form the stem of the plant and are two or three times as strong as those of cotton.

Flax is harvested for fibre production after approximately 100 days, or a month after the plant flowers and two weeks after the seed capsules form. The base of the plant will begin to turn yellowThe fibre degrades once the plat is brown.

Flax fibre is extracted from the bast beneath the surface of the stem of the flax plant. Flax fibre is soft, lustrous and flexible, bundles of fibre have the appearance of blond hair, hence the description of “flaxen”. It is stronger than cotton fibre but less elastic.

Flax fibre processing start after a process called threshing. Threshing is the process of removing the seed from the rest of the plant. Separating the usable flax fibres from other components requires pulling the stem through a hackle or beating the plant to break them. There are three machine to get the flax fibre; one of threshing out the seed. 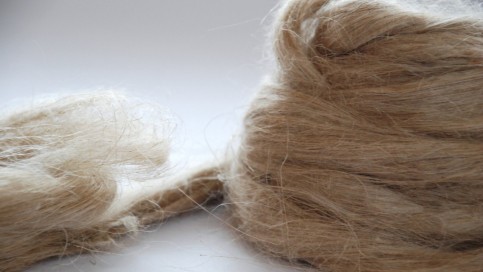 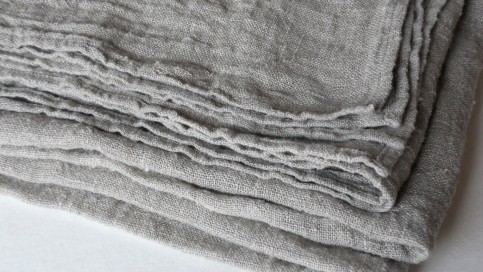 Linen fabric feels cool to the touch. It is smooth, making the finished fabric lint-free, and gets softer the more it is washed. However, constant creasing in the same place in sharp folds will tend to break the linen threads. This wear can show up in collars, hems, and any area that is iron creased during laundering. So it is better to hang your linen clothes rather than fold it.  Linen has less elasticity compare to cotton and does not spring back readily, explaining why it wrinkles so easily.

Linen fabric typically varies somewhat in thickness and is crisp and textured, but it can in some cases feel stiff and rough, and in other cases feel soft and smooth. When properly prepared, linen fabric has the ability to absorb and lose water rapidly. Linen can absorb a fair amount of moisture without feeling unpleasantly damp to the skin.

A characteristic often associated with linen yarn is the presence of “slubs”, or small knots which occur randomly along its length. However, in the case of many present-day linen fabrics,  slubs are considered as part of the aesthetic appeal of an expensive natural product. In addition, slubs do not compromise the integrity of the fabric, and therefore they are not viewed as a defect.